Joe Budden Has Apologized To Logic After His Rants

Joe Budden Has Apologized To Logic After His Rants 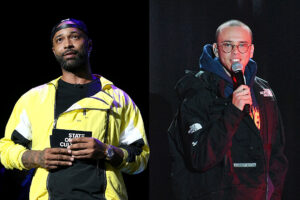 The 30 year old, had announced his retirement with his next album saying he wanted to be able to spend some more time with his family.

This led the host of the Joe Budden Podcast to say a couple of things regarding the Maryland born rapper’s retirement which were kind of sassy.

“They happy that he’s leaving. Why the fuck do you think I got the fucking celebration song queued up man?

Every member of the podcast have had their fair share of expressing their own opinion on Logic’s music and his decade-long career.

But with all of Budden’s backlash and calling him the worst rapper of all time, Logic has never responded or paid attention to it.

On Thursday, 23 July, 2020, Budden actually apologized for mocking his retirement from the hip hop scene.

“Fresh out of Twitter jail, unable to properly read the room and just hating myself and life, honestly.

“And unfortunately, I projected some of that unto you, Log. And, for that, I want to apologize.”

Budden goes on to mention and acknowledge the fact that Logic had retired without any trouble.

“That was wrong of me. I should be able to think that you aren’t the best rapper in the world, but celebrate your retirement.

“Because that is a time where somebody should be happy and look back on their career and get they shit off and be with their fans.

“Nobody wants to hear from this fucking old grumpy fuck saying,’Fuck you and shut up.’ Especially after that guy was allowed to retire peacefully. I felt bad.”

Logic since announcing his retirement went on to sign a million dollar deal with Twitch.

What do you feel about Budden’s apology?