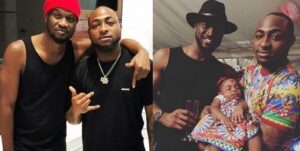 Nigerian award-winning artist, Davido has come out to slam everyone who had attended the separate P Square birthdays.

The Okoye twins celebrated their 39th birthday in a rather non-twin way as they held their own different parties.

One half, Peter had an indoor party while the other half, Paul had a rather public party having in attendance a couple of celebrities.

Some of the celebs in attendance were Harrysongz, Yemi Alade, Jude Okoye, and some others.

This didn’t sit well with the Davido Music Worldwide (DMW) boss as he felt the twins should celebrate as twins.

Earlier, Paul Okoye had gone on Instagram to bash his twin brother’s wife after her birthday wishes for the twins.