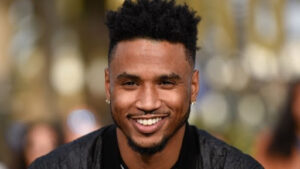 American singer and songwriter, Trey Songs has been arrested for allegedly assaulting a police officer.

The incident was said to have occurred during an NFL game in the Arrowhead Stadium on Sunday, January 24, 2021.

Trey was in attendance for the Kansas City Chiefs game where the altercation was said to have occurred.

This was according to video footage acquired by TMZ.

A witness stated that fans behind the singer heckled at him then he had asked them to calm down a little bit.

The witness then told the outlet that that police officer caught Trey by surprise and had initiated the altercation.

According to the witness, the singer only acted in self-defense and surely did nothing wrong as he was taken away in handcuffs.

The charges placed for his arrest were said to be trespassing, resisting arrest, and assaulting a police officer.

According to the outlet, the singer has been released from police custody.

See Also: Johnny Drille Gives Tips On How To Be A Songwriter