Cardi B Has Words For Haters After Twitter Trend 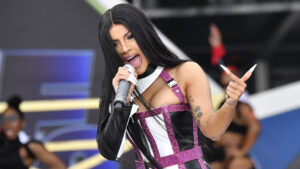 Grammy award winner, Cardi B has a clap back for those that started the #CardiBIsOverParty trend on Twitter.

The New York born rapper wasted no time in her reply as she took to her social media to address the trend.

“I woke up and I’m seeing that they are trying to make ‘Cardi B is cancelled party’. I’m like what the f**k. I’m not doing anything.

“So now I see these guys I guess are editing or they are claiming I have a fake Instagram, I don’t know, these people must think that I’m a 15-year-old girl.”

So people made this ridiculous lie of me on twitter.Im glad I pulled up all the receipts and DEBUNKED ALL OF IT .Its crazy the time and energy people put to try to destroy you but this was JUST RIDICULOUS 😂😂😩😩It proves to me tho that I intimidate anybody that has any hate towards me that they will find any possible way to break me .YOU CANT BREAK ME ! Bring up my past and everything I said YOU CANT BREAK ME .I WILL BE HERE ! I will not run away from social media ,I will not be discouraged of my work .

There were also posts that claimed the rapper from The Bronx was having a beef with Ariana Grande which she also addressed.

“Ariana Grande? I don’t even have a problem with her. Why would I ever talk about her? I like her music. I don’t know.”

Cardi B stated that the reports came from a fake Instagram accounts.

Later on, it was seen that another trend had started which were #CardiBIsComing and #WeLoveYouCardi.

Cardi B also had something to say to her fans.

“I’m seeing so much love from, not only my fans, but just random people that are not fan account pages, are just having my back and realizing how f**ked people could do certain shit.

“It’s crazy how that s**t backfired on the devil, I’m so thankful, I’m so grateful for you guys. Thank you for making those other hashtags trend.”

So this exactly what happened and every lie got DEBUNKED! https://t.co/3gqclvKNKW pic.twitter.com/7Surtgl5Kf

I do feel really powerful.The fact that I haven’t dropped music in 8 months .I haven’t announced none of the projects I been workin on .All I been doing is eating food & people have to make fake edits to cancel me it makes me feel like IM THAT BITCH ! https://t.co/UTPoqdumbI

Thank you for reading.