Kanye West Is Running For President Of The United States

Kanye West Is Running For President Of The United States 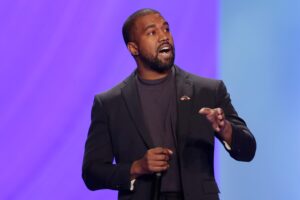 Veteran rapper and entrepreneur Kanye West has announced he’ll be running for President in 2020.

He is said to be going up against President Donald J Trump and Joe Biden in the presidential race.

This is not the first time the rapper had shown interest in the position but now he really made it clear.

The rapper had made a tweet that goes this;

“We must now realize the promise of America by trusting God, unifying our vision and building our future. I am running for president of the United States 🇺🇸#2020VISION.”

We must now realize the promise of America by trusting God, unifying our vision and building our future. I am running for president of the United States 🇺🇸! #2020VISION

The Yeezy designer got support from Technology entrepreneur, Elon Musk when he tweeted:

“You have my full support.”

You have my full support!

Elon Musk also replied a tweet from a fan that said “So this is how it started.” by saying “It may have started already.”

Sooo this is how it started.

It may have started already

The rapper also received support from his wife who became a billionaire, Kim Kardashian who made her support public.

The KKW Beauty boss retweeted her husbands tweets with the United States of America flag;

A lot of people on social media are a bit skeptical as to Kim being first lady and Kanye’s declaration been in Trump’s favor.

Although it’s not known as to how serious his intentions are since he hasn’t filed any paperwork to get to state election ballots but he still has time though.

Do you think Kanye would make a good President?