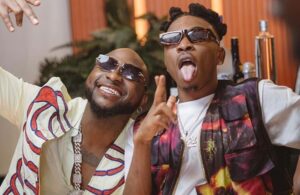 DMW’s Mayorkun and Davido have put a new single and video together which they titled Betty Butter.

The song is an Afro-Fusion mid tempo song sure to get everyone singing as an anthem.

The single produced by Speroachbeatz and directed by Clarence Peters seems to have a lot of wordplay.

Listen to the audio below:

Watch the official Video below: