Beyonce Will Release ‘Black Is King’ On Disney+

Beyonce Will Release ‘Black Is King’ On Disney+ 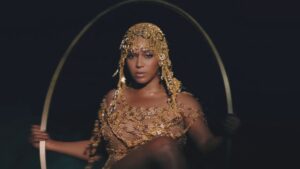 American singer Beyonce is set to release a new film titled ‘Black is King’ which she wrote, directed and produced.

The movie will premiere on July 31, 2020 and will be aired on Disney channel subsidiary, Disney+.

Also, the visual album will premier one year after the release of Disney’s The Lion King.

The film follows Black families throughout time in a really interesting and intriguing story of love and self identity.

The movie tries to take a look in depth to Black resilience, culture, tradition and excellence.

While announcing the visual album, Parkwood Entertainment described it as a memoir towards Black excellence.

“Black is King is a affirmation of a grand purpose, with lush visuals that celebrate black resilience and culture. The film highlights the beauty of tradition and Black excellence.”

See Also: 4 Reasons why you need to watch your favorite movies