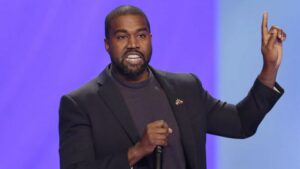 Apparently, billionaire rapper, Kanye West still has his eyes set as he releases his first ads for president.

Although, if the rapper is still serious about the seat, he definitely has a lot of work to do since he has a lot more grounds to cover.

His first political ad could be either right on time or way too late, either way, he has a lot on his hands.

The rapper had shown his interest via a tweet earlier in the year;

“We must now realize the promise of America by trusting God, unifying our vision, and building our future. I am running for the President of the United States #2020VISION”

Ye’s campaign ad carries Kanye on a podium with the American flag behind him as he gave a message as regards faith, religion, and prayer.

In a nutshell, the billionaire rapper is telling everyone that he still has eyes on the presidential seat and urging everyone to vote for him.

His campaign is coming in just barely 3 weeks to the election day which could either be a bad idea or a perfectly timed move.

See Also: Kanye West Is Running For President Of The United States