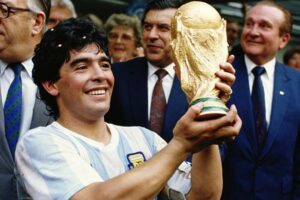 Real Madrid C.F., its president, and the Board of Directors have expressed their condolences over the death of Diego Armando Maradona.

The club extended its condolences to the family, friends, former clubs, and football fans worldwide.

The Argentine legend and ‘Hand of God’ scorer passed away due to a heart attack at the age of 60.

In the club’s statement, the Spanish club said;

“Diego Maradona one of the greatest players in the history of the game, has passed away at 60 years of age.

“And with Napoli, he lifted a UEFA Cup, 2 league titles, 1 Coppa Italia, and one Super Cup.

“He was also crowned world champion with Argentina in 1986.

“Diego Armando Maradona leaves behind a truly remarkable legacy, an icon for millions of football fans across the globe.”