Doja Cat Replies To Nas Dissing Her In New Song 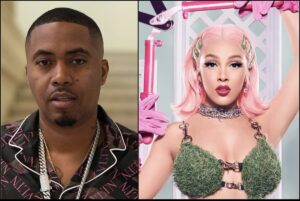 American rapper, Doja Cat has had words to say regarding fellow rapper Nas taking shots at her on new song ‘Ultra Black.’

The New York legend’s new song with Hit-Boy which was released on August 14, 2020 was done to appreciate black pride.

On the song though, shots were fired as he seemed to go for the attention the of Los Angeles born singer and rapper.

Doja had a series of issues after getting accused of being racist, Nas had also mentioned that she was half South African and half Jew.

In the line, Nas said;

Listen to the song here;

This didn’t really sit well with the ‘Say So’ crooner who took to TikTok to express her own thoughts on the issue.

In the video, she said;

“I’m so offended and upset by this song, have you guys heard ‘Fruit Salad’ by the Wiggles.”

Doja Cat reacts to Nas name-dropping her in his latest song with new TikTok. pic.twitter.com/NEv8iBDcHK

As regarding her being racist issues, the singer had made a post saying;

“I want to address what’s been happening on Twitter.

“I’ve used public chat rooms to socialize since I was a child.

“I shouldn’t have been on some of those chat room sites, but I personally have never been involved in any racist conversations.

“I’m sorry to anyone I offended.”