Gini Wijnaldum To Give Liverpool His Decision This Week 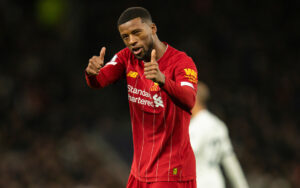 Liverpool midfielder, Gini Wijnaldum is set to give Liverpool his decision on a new contract later this week.

According to Sky Sports, he has told the club he’ll give his decision on a contract extension in a few days.

Should the Dutchman turn down the offer of a contract renewal, he’d start talks with other clubs from January.

The Dutchman’s contract with The Reds expires at the end of the season which means he might be a free agent.

Patiently waiting is Spanish giants, FC Barcelona who are still eager to sign the Netherland midfielder.

Their manager Ronald Koeman is still showing keen interest in bringing Wijnaldum to the Camp Nou.