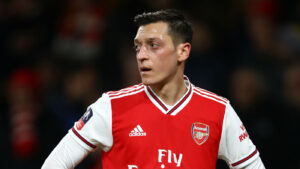 Arsenal midfielder, Mesut Ozil to leave the Emirates in this January’s transfer window.

The German footballer has fallen down the ranks with manager Mikel Arteta who doesn’t see him as part of his plans.

Ozil has not featured in any competition for The Gunners so far this season.

It was already stated that the future of Ozil at the Emirates was so far in doubt for the manager.

According to Daily Star, the German agreed to a 3-year deal to join Turkish side Fenerbahce.

He had been linked with a move to the Turkish club for the last two years and now the long story seems complete.

Ozil will initially join the club on a 6-month loan before his 3-year contract at the end of the season.