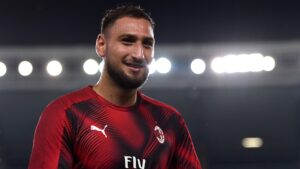 The goalkeeper’s contract is set to expire soon and thus his future with the club is uncertain.

A contract renewal between the goalkeeper’s agent Mino Raiola and the Rossoneri is still yet to be agreed upon.

Barcelona might be able to secure the star goalkeeper on a free transfer if his current status with the club is still on.

Despite having one of the best goalkeepers in the world, the Italian would be a great addition for the Blaugranas.

Although, the only problem Barcelona may face is the fact that the goalkeeper is Keen on remaining at AC Milan.

Speaking on his future, Donnarumma said;

“If I want to stay? Of course, my agent will discuss it with the club. There is no problem.

“Mino [Raiola] knows what to do, the club will see. Meanwhile, I want to enjoy this moment.”