Mikel Arteta Planning A Clear Out In The Arsenal Squad

Mikel Arteta Planning A Clear Out In The Arsenal Squad 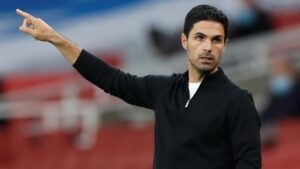 Arsenal manager, Mikel Arteta is ready to rebuild his Arsenal squad and is now ready to let go of a few players.

The manager is willing to let go of these few players in order to influence the funds for getting the new guys.

Already, midfielder Mesut Ozil seems to be on his way out of the Emirates this January transfer.

The team rebuild will happen during the January transfers as well as the summer transfers.

Sokratis Papastathopoulos is also on the verge of joining another club.

Other players who The Gunners would be getting rid of are; Shkodran Mustafi, Mohamed Elneny, Callum Chambers, and Lucas Torreira.

Mesut Ozil and Sokratis are part of his list but already seem to be on their way out of the Emirates.

Probabilities are that the Gunners youngsters will go on loan transfer while the others can leave as they wish.

See Also: Kevin De Bruyne Not In A Hurry For A New City Contract