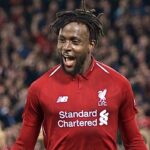 Divock Origi Could Leave Liverpool This Month Merseyside club, Liverpool are willing to let forward Divock Origi leave the club this month. It was revealed that The Reds are not getting in the way of the forward leaving if he gets an offer from another club. The Belgian has fallen down the ranks at Anfield and now struggles for playing time under manager Jurgen Klopp. The … END_OF_DOCUMENT_TOKEN_TO_BE_REPLACED