Real Madrid To Revive Their Hopes In The La Liga Race 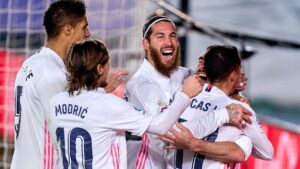 Real Madrid has had an impressive run in the Champions League and are looking to improve their hopes in the La Liga race.

Los Blancos will face Celta Vigo in this weekend’s Liga Santander game which will determine how they’ll probably end the season.

Although they haven’t lost any game since January 30, they have been at a 100% because of the draws they were having.

Celta Vigo seems to be a hurdle they’ll have to cross in order to remain in contention for the Spanish title.

Atletico Madrid and Barcelona sit on top of the table but are at arm’s length from Madrid.

Los Blancos have already secured their UCL quarter-final spot as they are the only Spanish team left in the competition.

Real Madrid has to bring up their A-game if they do not want the gap extended as the season seems to be gradually drawing to a close.