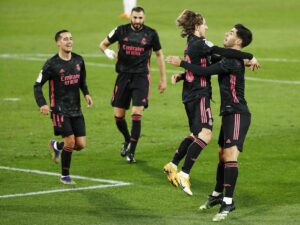 Los Blancos have moved up second place in the La Liga table as they saw Karim Benzema dominate Celta Vigo away from home.

The Frenchman netted two goals and recorded an assist in the 20th, 30th, and 90th minutes of the game.

The team put up an impressive display which proved that they still had the fire in them to win the Spanish title.

Recently, Karim Benzema has been Los Blancos’s stand-out player and also arguably the best player in the league so far.

Also importantly, Marco Asensio has taken the role of an impressive super-sub who came in in the 71st minute to seal the deal in dying minutes.

The Spaniard has now scored in back-to-back games for the first time since 2017.

See Also: Real Madrid To Revive Their Hopes In The La Liga Race