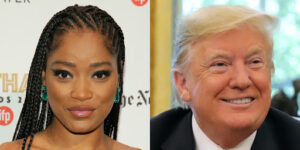 American singer Keke Palmer has spoken on the protests in the United States, stating that President Donald J Trump might be inciting a race war.

Protests have erupted all over the country on Police brutality and her words were to support the Black Lives Matter movement.

“Of course no one wanted the coronavirus pandemic to happen, but i think quarantine allowed us to be more reflective.

“Maybe before, we’d be able to gloss over it because of work.

“It’s also been a build up: There have been so many names turned into hashtags, so much pain. It blows me away because our language has progressed, I don’t mean specifically Black people.

“I mean young people, millennials. Naming White supremacy, saying that out loud. When I heard ‘defund the police,’  I’m like, Oh sh*t. We actually could do that.”

The American actress and singer continued by saying;

“I think President Trump plays into it too. He’s inciting a race war. His craziness is inspiring us to just really get him the f**k out!

“It’s like we needed somebody who riled us up so much for us to be activated to the point of saying, ‘Oh hell no.’ I can’t let this guy continue.

“I have to do something. I have to find a way to let my voice be heard and to let people know that I’m not with this.”