Takeoff Has Denied His Rape Allegations 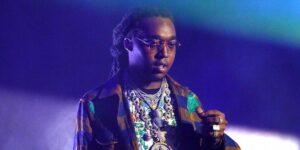 American rapper and Migos member, Takeoff has denied the rape allegations that were charged against him.

The rapper was sued by an anonymous woman on the charges of rape.

The lady said that Takeoff had raped her at a house party she attended via the invitation of Dj Durel.

She claimed she was raped in Durel’s bedroom after there had been an argument involving the rapper.

But the rapper’s attorney Drew Findling has come out to deny these accusations as he deemed them baseless.

“We have reviewed the allegations and have similarly done our own due diligence.

“What has become abundantly clear is that the allegations made against Takeoff are provably false.

“The claims and statements made regarding this lawsuit indicate that the plaintiffs’ representatives have not spoken with relevant witnesses or reviewed available evidence.”

“Takeoff is renowned for his artistic talent as well as his quiet, reserved and peaceful personality.

“In this instance, those known personality traits have made him a target of an obvious exploitative money grab.

“As his counsel, we are well aware and well versed on the importance of civil and criminal prosecution of true sexual assaults.

“This is not one of those situations.”

The anonymous woman wants to escalate the lawsuit to a criminal level.