Jose Mourinho On The Long-Term Future Of Gareth Bale 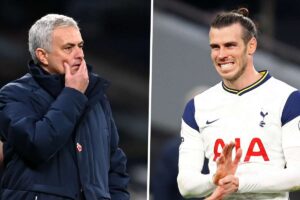 Tottenham manager, Jose Mourinho has said that only Real Madrid had the power to determine the future of Gareth Bale.

The Welshman had fallen down the ranks in the Spanish capital leading to him joining the London side on loan.

According to some reports, the Welshman’s agent had stated that Bale still had love for Los Blancos.

Reports have also stated that Tottenham is willing to sign Bale on a permanent deal but Mourinho had played down the reports.

In his statement, he said;

“Gareth again! Maybe we do not play tomorrow and every question is about Gareth! Come on! Just because he scored two goals! Come on.

“In relation to that [Garet Bale’s future] You should contact your colleagues in Madrid and they should ask Zidane as he is a Real Madrid player and he is not a Tottenham player so Real Madrid has everything in their hands.

“They have a player with one year of contract and have the power in their hands.

“I just have a player on loan and I am trying to make the best out of the player for Tottenham Hotspur, for all the respect to Real Madrid.”