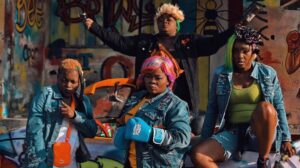 Omo Ghetto, a movie co-directed by Funke Akindele-Bello has broken a four-year record as the highest-grossing movie in Nollywood.

The Saga knocked Kemi Adetiba’s ‘The Wedding Party’ out of being the highest-grossing Nollywood movie of the decade.

Since the news broke out, many took to Twitter to express their pleasure and congratulate the actress;

You gotta give it up to @funkeakindele ,,,,common a blend of street, classy, romance, betrayal, action, comedy, all in one movie #omoghettothesagamovie this movie is underrated if it doesn’t win like 10 awards

Funke Akindele about to hit half a billion at the cinemas. I'm so happy cause I watched her build her career from the bottom. Talent + Hard work🙌🏾

Funke Akindele is a genius.
Eniola Badmus is a cute fool.
Mario is an amazing goat.

To think Funke Akindele and her crew achieved that during a pandemic is worthy of commendation.

It's Funke Akindele breaking the box office records in a Covid year for me. . . . Reilly iconic!