Toni Kroos Takes A Jab And Claps Back At Mason Mount

Toni Kroos Takes A Jab And Claps Back At Mason Mount 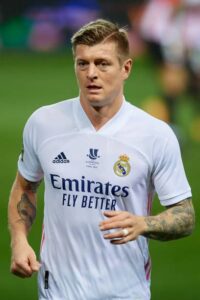 Despite losing in the semi-finals of the UEFA Champions League, the German still found time to take jabs.

Los Blancos were outplayed by the Blues on Wednesday which seems to have created a rocky foundation in the Madrid camp.

Prior to the game, Kroos had stated that in his 15-year career, no Chelsea individual player had caused him to lose sleep.

Well, boys will be boys, Mason Mount had a reply that was somehow fascinating. The youngster told BT Sport;

“I saw one of their players say that none of our players stop him from sleeping, maybe he should lose a bit of sleep for our team, we could have scored more than five goals.”

The German midfielder found a final response that we can consider as a low blow to the Englishman.

Despite suffering a disappointing loss, Real Madrid is still far ahead of Chelsea as far as Champions League is concerned.

See Also: Real Madrid May Soon Not Be One Of Europe’s Best