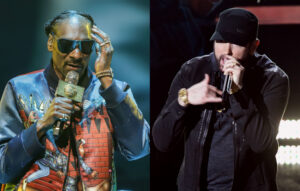 Eminem dissing Snoop Dogg on his song Zeus on his Music To Be Murdered By (Side B) album kinda took everyone by surprise.

Now, Slim Shady has come out to explain the reason he had taken shots at Snoop Doggy Dogg.

Em was on Shade45 Radio to discuss his album, Music To Be Murdered By (Side B) and the Zeus track.

It was presumed that the shots fired at Snoop were as a result of Snoop’s remarks during an interview on The Breakfast Club.

During the interview, the Doggyfather had said;

“Dr. Dre has probably put Eminem in the position to where he could be one of the top 10 rappers ever.

“I don’t think so, but the game feels like he’s top 10 lyricists and all that comes with it.

“But, that’s just because he’s with Dr. Dre and Dr. Dre helped him find the best Eminem he could find.”

Em explained that he wasn’t really troubled with the thought and opinion.

The Detroit rapper stated that the opinion was up to a point in his 30-minute interview.

“Him saying I’m not in his top 10 because there are some rappers in the 90’s I can fuck with.

“Him saying Dre made the best version of me, absolutely, why would I have a problem with that? Would I be here without Dre? Fuck no, I wouldn’t.”

Slim Shady then went on to explain the reason why he had taken shots at the Long Beach rapper.

“I think it was more about the tone he was using that caught me off-guard ’cause I’m like, where is this coming from?

Em then said he probably wouldn’t have given any thoughts to the whole tone thing until the last statement.

See Also: Could J.Cole Retire After The Release Of The Fall Off?