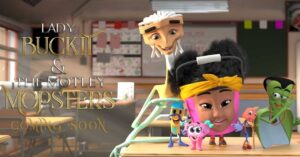 The first-ever Nigerian animated feature film Lady Buckit and the Motley Mopsters is set for its release on the 11th of December.

Hot Ticket Productions stated that the movie is valued at $1 million and will serve as an escape for families.

In the statement made by Blessing Amidu, the Chief Executive Officer of Hot Ticket Productions, she said;

“As we approach the end of the year, it is important to provide some succor and means of escape and release for children and the entire family.

“We strongly believe that entertainment is a powerful tool for this.

“We hope the fantastic universe of Ladybuckit and the Motley Mopsters will serve as a source of joy for and laughter for Nigerian families.

“And millions of people around the world during the festive season and for many years to come.

“This year has been a tough one for the world. Families have had to deal with a global pandemic, economic challenges, and civil unrest.”

It stars some of Nigeria’s finest actors including Bimbo Akintola, Bola Edwards, Patrick Doyle, and a host of others.

She also stated that a lot of interest has been shown since the release of its teaser in August 2020.

“With scenes showing notable Nigerian landmarks and historical places such as Oloibiri, a community in Bayelsa State, where crude oil was first discovered in commercial quantity in 1956.

“It is expected that parts of the movie will serve as a flashback to Nigeria’s early years.”

Lady Buckit and the Motley Mopsters will have its debut locally and internationally on December 11th.