Silva And Tammy To Miss Game Against Leeds United 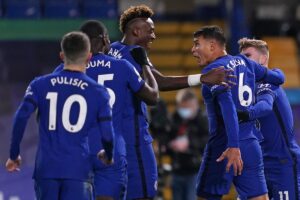 Chelsea manager Thomas Tuchel has said that both Thiago Silva and Tammy Abraham will miss their game against Leeds.

Abraham is said to be out due to ankle pain while the Brazillian aggravated his strain during the team’s training.

Tammy had developed his ankle pain after a tackle during their game against Burnley. Thiago on the other hand is in transition.

During the interview, the Blues manager said;

“Thiago had a little setback at the end of the training session the day before yesterday. He felt something around the same area where he was injured so we had to take him off.

“He is back into a transition phase but not back into team training.

“Tammy Abraham still has the ankle pain from the tackle during the Burnley game.”